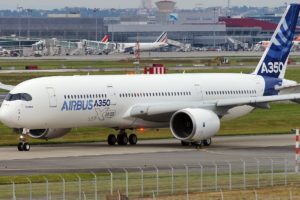 “Hong Kong Airlines received the A350-900 in a three-class layout, designed to carry up to 334 passengers (33 seats in the business class, convertible into fully reclining beds, 108 seats in the new class Economy Comfort and 193 seats in the economy class). The aircraft is equipped with the latest cabins with a completely new entertainment system and a communication system in flight”, said Airbus is official statement.

Meanwhile, Hong Kong Airlines established service connection Los Angeles and Hong Kong, which will be the first nonstop service between LAX and Hong Kong International Airport (HKG). The new direct flight between the two cities will begin in December 18.

Airbus A350 XWB is a family of long-range, twin-engine wide-body jet airliners. The A350 is the first Airbus aircraft with both fuselage and wing structures made primarily of carbon-fibre-reinforced polymer. In June 2017 after 30 months in commercial operation, 80 Airbus A350 were in service with 12 operators.