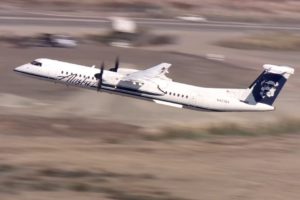 Horizon Air employee stole the short-haul turboprop Bombardier Q400 from Seattle airport, USA. He barreled down a runway, took off and flew the two-engine turboprop above the Puget Sound, flying in dramatic loops before crashing in a wooded area of a nearby island. The crash caused the death of the airline employee.

The theft was identified as Richard B. Russell, who is Horizon Air employee whose duties would have included handling baggage and de-icing planes but not flying them.

It is noted that the aircraft made an unauthorized departure without passengers on board.

The airport was temporarily suspended, but later the operations were resumed. Representatives of the US Coast Guard came to the scene. Details of the incident are being clarified.

The incident at Seattle-Tacoma International Airport has exposed blind spots in aviation security and safety, and challenges in screening employees and addressing potential mental health problems. The National Transportation Safety Board is reviewing the cockpit voice recorder and flight data recorder from the wreckage, which will provide more insight into what happened.

Horizon Air is a regional airline based in SeaTac, Washington, United States. Horizon Air and its sister carrier Alaska Airlines are subsidiaries of Alaska Air Group and all Horizon-operated scheduled flights are marketed and sold by Alaska Airlines. Planes operated by Horizon are co-branded as “Alaska Horizon” in recognition of the Horizon brand and to differentiate aircraft from those operated by Alaska’s other regional airline partner, SkyWest Airlines.