Hurricane Dorian is expected to impact the Maritime provinces later this week.

The latest computer models from the United States National Hurricane Center (NHC) suggest that the storm could reach the province of Nova Scotia on Saturday morning, whipping with its hurricane winds.

The center’s last hurricane tracking map shows Dorian traveling along the Atlantic coast of Nova Scotia, producing winds that could reach more than 130 kilometers per hour.

Early in the day, the category 3 hurricane seemed to stop in the Bahamas, where its 190-kilometer winds hit the islands, destroyed thousands of homes and killed at least five people. The United Nations and the International Red Cross began to mobilize to face the humanitarian crisis that is taking place.

But the Canadian Hurricane Center in Halifax also warns that Dorian could end up at sea, which would lessen the impact on the region.

These are some of the questions asked by the public broadcaster CBC: The Passionate Eye.

“In just one devastating month, Houston, Florida and the Caribbean changed forever. Three monstrous hurricanes arrived from the Atlantic during the summer of 2017, one after another, breaking storm records and killing hundreds of people. ”

Thus begins the special documentary about hurricanes that hit harder and harder leaving destruction and death in their wake.

The first, he says, was Hurricane Harvey that brought catastrophic rains and floods to Houston, causing damage of $ 125 billion.

Immediately afterwards Irma arrived beating the Caribbean and decimating the island of Barbuda. The third was Maria, a category 5 hurricane, which devastated Puerto Rico.

The three surprised the forecasters.

Hurricane Harvey quickly increased its strength and generated large amounts of rain. Hurricane Irma was unusual because it maintained its maximum wind speed of 180 miles per hour for so long, 18 hours.

Hurricane Maria was one of the fastest hurricanes in history. What can be done to better predict your path and intensity?

The Canadian government recommends that all travelers avoid traveling to the Bahamas due to Hurricane Dorian. The east coast of Florida, from northern Deerfield Beach to the mouth of the St. Marys River, is also affected by this warning. 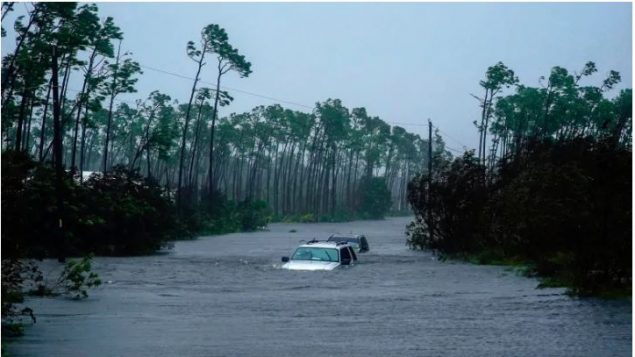 This is how the passage of the hurricane on Tuesday defined the Prime Minister of the Bahamas, Hubert Minnis, who hit the islands causing floods to the second floors of the buildings, trapping people in the attics.

So far five deaths have been reported.

“We are in the middle of a historical tragedy,” said Prime Minister Hubert Minnis. “The devastation is unprecedented and extensive.”

This Tuesday morning Dorian winds had dropped to 193 km/h, which made it a category 3 hurricane still very dangerous, and the storm was heading to the Grand Bahama Island since Sunday night.

Abaco and Grand Bahama, no more than 12 meters above sea level at their highest points, house some 70,000 people. The Grand Bahama airport was under two meters of water.

The storm focused about 70 kilometers northeast of Freeport and 175 kilometers from West Palm Beach, Florida. Hurricane winds extended up to 75 kilometers in some directions.

Dorian was expected to approach the Florida coast later on Tuesday, but the threat to the state declined significantly, with the projected trajectory of the National Hurricane Center showing most of the coast outside the cone of possible landing. No place in Florida had more than eight percent chance of being hit by hurricane winds.

The only storm recorded more powerful than Dorian was Hurricane Allen in 1980, with winds of 305 km / h, although it did not touch land with that force.