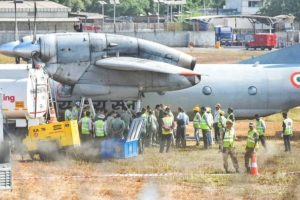 The Indian Air Force plane Antonov An-32 overran Runway 27 at Mumbai Airport during takeoff after a technical malfunction. The plane rested in the safety zone without causing serious damages and injuries among the people on board and on the ground. The aircraft was on it’s way to Yelhanka Air Force Base in Bengaluru and the incident took place at the time of takeoff.

“The pilots decided to abandon the take off due to a technical glitch. The aircraft and crew is safe and will be recovered soon”, said the IAF spokesperson Group Captain Anupam Banerjee. “Efforts are underway to move the aircraft from the unpaved surface and the same was expected to be accomplished soon”, added he.

The investigation for the root cause of the accident is underway. Officials said that as per Standard Operating Procedure, the crew decided to abort takeoff as certain parameters for flying did not match after the aircraft started rolling down the runway.

Due to the incident, the runway is not available for operations and many flights have been delayed. However, secondary runway 14-22 is functioning.

Antonov An-32 is a twin-engined turboprop military transport aircraft. The plane is designed to withstand adverse weather conditions. The high placement of the engine nacelles above the wing allowed for larger diameter propellers, which are driven by 5,100 hp rated Ivchenko AI-20 turboprop engines.