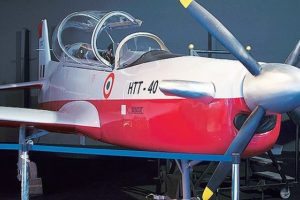 Indian aircraft manufacturer Hindustan Aeronautics Limited started advanced testing of its HTT-40 training aircraft. During these tests, the aircraft first performed a corkscrew with two revolutions and subsequent return to normal flight. The tests were successful.

A corkscrew is the name of a plane lowering in a steep downward vertical spiral at high angles of attack. For many airplanes, a spin is a serious danger, and pilots must have the skills to pull the aircraft out of this state. You can practice these skills on training aircraft.

It should be noted that the development of the aircraft, for which the corkscrew is one of the standard flight modes, is quite complicated. The fact is that designers have to balance between sufficient strength of an aircraft’s construction and its weight to complete a corkscrew.

The development of the two-seater training aircraft HTT-40 has been conducted by Hindustan Aeronautics Limited since 2013 to replace the outdated HPT-32 Deepak. The new aircraft will be used for initial and advanced training of pilots.