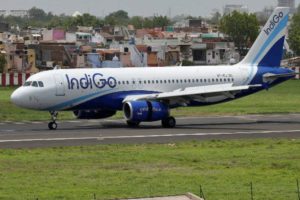 IndiGo aircraft Airbus 320neo with 136 passengers on board made an emergency landing at Kolkata airport. The aircraft was performing flight 6E-237 en route from Jaipur to Kolkata, but on 45 nautical miles from the destination, the cabin was filled with smoke due to engine bearing failure. The aircraft landed safely at Kolkata airport, but soon later a few passengers left the plane using emergency exits.

“The plane had smoke in cockpit, cabin and lavatory. The pilots asked for emergency call”, said the official statement of IndiGo.

Fortunately, there were no reported injuries during the incident and all the passengers were disembarked successfully at the runway.

The investigation for the root cause of the accident is underway. According to preliminary information, the issue came from an an engine bearing failure and the cabin was filled with smoke, as cabin takes air from engine bleed.

The Airbus A320neo family is a development of the A320 family of narrow-body airliners produced by Airbus. The aircraft is fitted with Pratt&Whitney engines.