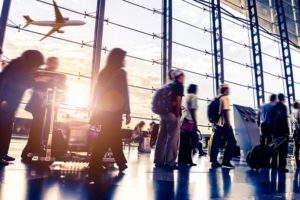 Indonesia expects almost 30% increase of air passengers next year. The local authorities predicted the number of air passengers would climb 29.6% to 140 million in 2018, much higher than the projected year-end figure this year of 108 million passengers.

“According to our estimates, the volume of traffic will be about 140 million people, which is 29.6% more than this year”, said the transportation Ministry airport director, Bintang Hidayat. He also said that by the end of this year this sector will grow by about 12% and will reach 108 million people. “The increase in passenger traffic is due to the economic growth of the country, which is predicted to be 5.4% next year”, added he.

In addition, the representative of the Ministry of Transport added, that the airlines purchase new aircraft, expand the geography of flights.

At the same time, as the representative of the National Association of Air Carriers has stressed, insufficient infrastructure development can become a deterrent for air transportation. For example, the largest airport in Soekarno-Hatta in Jakarta can receive no more than 43 million passengers per year.