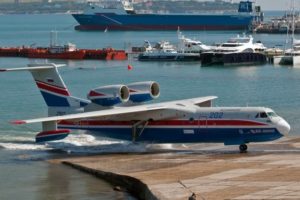 Indonesia is interested in buying Be-200 amphibious aircraft. This was released by the Extraordinary and Plenipotentiary Ambassador of Indonesia in Russia, Wahid Supriyadi. The exact information for the purchase is unclear yet. This aircraft is considered very fitting with the needs of Indonesia are often hit by forest fires and for sea search missions.

“We are interested in acquiring Be-200 amphibious aircraft, which can be used both for military purposes and for fighting fires, the largest Mi-27 helicopter, as well as submarines”, said Wahid Supriyadi.

The Be-200 is a unique Russian amphibious aircraft that is well-suited for firefighting missions. It can land on water and scoop up thousands of gallons of water into its hull and then drop its load onto a fire. The plane can be reconfigured for search-and-rescue or passenger flying. Marketed as being designed for fire fighting, search and rescue, maritime patrol, cargo, and passenger transportation, it has a capacity of 12 tonnes of water, or up to 72 passengers.

Newer PostRevenue of Aeroflot increased by 4.9% yoy in H1 2017
Older PostCargo airplane Antonov An-26 burned down after runway excursion at Maban Airstrip in South Sudan