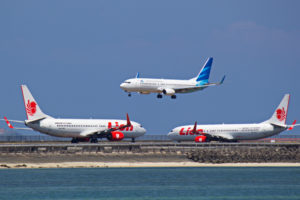 The Indonesian Ministry of Transport has carried out a technical feasibility study of 117 aircraft operated by airlines in Indonesia. The decision to conduct the inspection was made after the crash of the Indonesian Lion Air’s aircraft Boeing 737 Max 8 (flight JT610) off the coast of West Java on October 29, 2018.

The Aviation Administration and the Ministry of Transport of Indonesia stated that 117 aircraft had passed the technical feasibility study. Checks were at 10 airports across the country.

The Ministry of Transport of Indonesia reported that all aircraft have been tested.

In end of October, Lion Air’s Boeing 737 MAX8, carrying 189 passengers and crew, crashed into the sea shortly after takeoff from the Indonesian capital Jakarta. The flight JT610 was reported missing 13 minutes after it took off at 6:20 a.m. (local time) en route to Pangkal Pinang. All the 189 people on board were reported dead following the terrible accident.