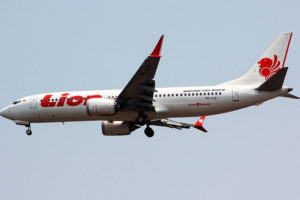 Indonesian Navy divers discovered the location of the voice recorder from the cabin of the Lion Air Boeing 737 MAX 8 that crashed in October 2018, reported the Deputy Minister for Maritime Affairs. According to the official, divers also managed to find the personal belongings of the 189 victims of the air crash.

If the voice recorder is in good condition, it can provide investigators with valuable information to establish the causes of the crash of the liner, which fell into the sea shortly after takeoff from Jakarta. The investigation into the causes of the catastrophe is not fully completed, since so far only data from one black box, which records the readings of the instruments, has been investigated. During the investigation, it turned out that Boeing did not update the pilots’ instructions for the 737 MAX 8 and 9.

Earlier, a representative of Lion Air did not exclude the possibility of termination of the contract for the supply of 190 aircraft to the amount of 22 billion USD. Indonesia’s ruling Democratic Party appealed to the airline on behalf of the parliament asking them to abandon the purchase deal of Boeing 737 MAX after the disaster over the Java Sea.

Boeing 737 MAX 8 of the Indonesian airline Lion Air crashed on October 29, flying from Jakarta en route to Pangkal Pinang, the capital of the Sumatran island of Bangka-Belitung. The plane fell into the Java Sea 13 minutes after takeoff. On board were 189 people, all reported dead. This is the first crash with an aircraft of this modification, which was launched on regular flights only in May 2017.