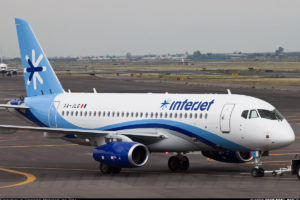 Mexican airline InterJet, which is the largest foreign customer of the Russian short-haul aircraft SSJ 100, will keep the 22 aircraft already received but will reject the order for the 8 additional. The decision is taken amid financial difficulties of the Mexican air carrier. Most of the SSJ 100s that have already been delivered to the carrier does not fly, since InterJet does not have the funds for engine repairs.

The fact that InterJet will give up eight additional SSJ 100 aircraft, stipulated by a firm contract with CJSC Sukhoi Civil Aircraft (GSS), is part of the United Aircraft Building Corporation (UAC) of 2011, told by two top managers of the aviation industry.

“They wanted to acquire up to 30 aircraft, of which 22 today are already in the carrier’s fleet”, commented CJSC Sukhoi Civil Aircraft. “But the financial condition of InterJet does not allow for the implementation of plans”, adds the company.

The reason for this was the decline in the peso exchange rate that began in 2016–2017. The local currency fell to a historic minimum, which led to an increase in airline expenses. The GSS claim that there is no legally registered refusal of InterJet.

Against the background of financial problems, the Mexican airline makes personnel changes. In January, Jose Luis Garza, who had led the carrier since its founding in 2005, left the chair of the general director. He was replaced by the American William Shaw, who participated in the creation of the low-cost airline Viva Air Peru and Viva Air Colombia. The total amount of the Interjet’s debts reaches 150 million USD, which is why the carrier is not able to pay for the new aircraft or even repair the engines of the already delivered SSJ 100.

Meanwhile, the InterJet management requests the engines to be repaired “against future payments” in order to start flying as soon as possible.