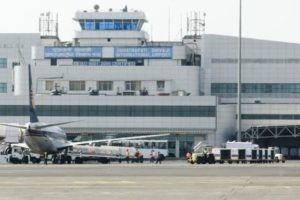 At the International Airport of Mumbai there are two crosswise runways, which makes it impossible to use both bands simultaneously. In this regard, the harbor is classified as an airport with one runway. The takeoff strip of the airport is designed for 46 takeoffs and landings per hour, while at the airport in Mumbai twice a day managed to perform 50 takeoffs and landings per hour.

“The time gap between the movement of two aircraft in an ideal situation is 65 seconds”, says the official statement of the airport representative. “About 900 flights are performed daily at the airport. The record was established due to the fact that on Friday there were more unplanned charter flights and flights of private planes. We hope to cross the line of 1,000 flights per day in the near future”, adds the statement.

The International Airport of Mumbai is the second facility, which regularly executes more than 50 flights per hour on single runway. It is the 14th busiest airport in Asia and 29th busiest airport in the world by passenger traffic in calendar year 2016 handling over 44.68 million passengers.

“London Gatwick Airport is the only airport with one runway, which regularly executes more than 50 flights per hour. In all other airports, there are 42 flights or less. Mumbai is the second airport in the world, carrying out more than 50 flights”, said the director of the Indian division of the Asia-Pacific Aviation Center, Kapil Kaul. “It happens that under good weather conditions we perform ten landings in ten minutes”, added he.