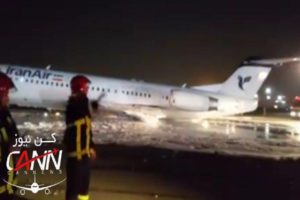 Iran Air plane Fokker 100, performing a domestic flight 215 from Qeshm International Airport to Tehran-Mehrabad Airport, caught fire after aircraft’s landing gear did not open properly. During the accident, on board of the airplane, there were 24 passengers and 9 crew, all of them evacuated without injuries.

According to the local news agencies, the pilot was not able to open the back wheels of the plane and circled the airport attempting to open all the wheels before landing the plane on its body. Large flames can be seen billowing from the plane as it lands on the tarmac in the dramatic night-time landing. The emergency teams were on the scene of the accident and poured foam over the aircraft to extinguish the subsequent fire. Fortunately, it was collected quickly without causing injuries among the people on board.

The local authorities initiated an investigation of the accident.

Fokker 100 is a medium-sized, twin-turbofan jet airliner from Fokker, the largest such aircraft built by the company before its bankruptcy in 1996. The type possessed low operational costs and initially had scant competition in the 100-seat short-range regional jet class, contributing to strong sales upon introduction in the late 1980s. By July 2017, a total of 113 Fokker 100 aircraft remained in airline service with 25 airlines around the world. Although airlines are currently retiring the aircraft, there are still large numbers in operation in both Australia and Iran.