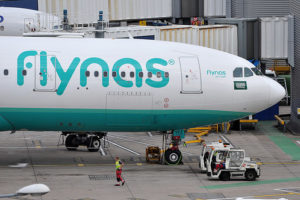 Iraq and Saudi Arabia resumed the air connections after 27 years of interruption, releases a statement of the Iraqi Ministry of Transport. The document says that Iraq is open to cooperation with all countries, and, first of all, with its neighbors in the region.

“Within the framework of bilateral cooperation between Iraq and Saudi Arabia, both sides signed a memorandum on cooperation in organizing air communications”, says the Iraqi Ministry of Transport.

On Wednesday, at the airport in Baghdad landed the first plane of the Saudi airline Flynas in last 27 years. It was met by the Minister of Transport of Iraq Kazem Finjan and the staff of the Saudi embassy in the Iraqi capital.

It is planned that the Saudi airline will fly to different regions of Iraq.