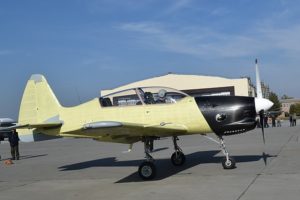 Irkut aircraft manufacturer plant will built five training aircraft Yak-152 until the end of 2017 and another ten in 2018.

“By the end of this year, it is planned to build the first batch of three Yak-152 in Irkutsk for their subsequent delivery to the Air Force Aerospace Force of Russia. In addition, two more aircraft must be built to intensify the flight tests. End of the year Irkutsk will release five airplanes”, said the statement of Irkut Corporation. “In 2018 the Irkutsk aircraft plant (branch Irkut Corporation) can produce more than ten Yak-152”, adds the statement

Speaking about export potential of TCB Yak-152, the official from the aircraft manufacturer noted that, in particular, “Kazakhstan and Belarus favored the purchase of aircraft of this type for their flying schools. The aircraft has not yet been adopted for military service, but after that the demand for the Yak-152 on the world market is expected to be high”, said the source.

The aircraft Yak-152 is designed by the Yakovlev Design Bureau (part of the Irkut Corporation). It is equipped with a diesel engine of 500 hp. The maximum take-off weight is 1,490 kg. The maximum speed of the flight is 500 km/h, while the practical ceiling is 4000 m. The rate of climb near the ground is 10 m/s. The maximum operational overload is nine units and flight range is 1500 km.

Newer PostCessna 208B Grand Caravan damaged after runway excursion at Sinak Airport in Indonesia
Older PostBoeing forecasts the need of 1.2 million pilots and engineering personnel to 2036