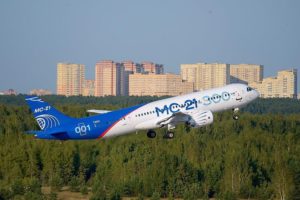 The aircraft Irkut MS-21-300, passing flight tests at the aerodrome of the Flight Research Institute M. M. Gromov, made its first landing in the dark.

During the flight, the functioning of navigation and landing equipment, as well as external lighting equipment, was checked. For instrumental testing of systems, the aircraft made several passes over the runway from two directions at different heights. The flight task was completed successfully and all systems worked normally

“Three pilot aircraft MS-21-300 are being built at the Irkutsk Aviation Plant, a subsidiary of PJSC Irkut Corporation, two of which will join the flight test program, and one will go on resource tests at Flight Research Institute”, said the aircraft builder.

Irkut MC-21 is a Russian single-aisle twinjet airliner, developed by the Yakovlev Design Bureau and produced by its parent Irkut, a branch of the United Aircraft Corporation (UAC). The initial design started in 2006 and detailed design was ongoing in 2011.