A billion-dollar arms deal between the Israel Defense Ministry and the United States for new fighter jets and helicopters remains stalled as Israel goes to a fourth round of elections in two years.

The deal is currently facing obstacles due to disagreements between the defense and finance ministries over the method of payment and because the government has not approved a budget for the country. The budget will be approved, at the earliest, in mid-2021.

In October, the Finance Ministry’s legal advisor, Avi Mesing, sent a letter to Deputy Attorney General Meir Levin, citing legal issues with the progress of the deal. According to a Walla News report, Mesing blamed the Defense Ministry for trying to establish a “parallel mechanism” that would have allowed him to receive a loan and avoid the spending limit that was set by law.

A source in the Defense Ministry told The Jerusalem Post on Monday that there is no progress on the deal and that it remains stalled.

“There is nothing new,” said the source.

Last month, the director general of the Defense Ministry, Amir Eshel, warned that the continued postponement of the agreement undermines Israel’s security. He blamed a lack of budget as a major obstacle preventing his progress.

The IDF, he said at the time, “urgently” needs new aircraft to replace the old Israeli fleet of Re’em Boeing 707 refueling tankers, which are close to 60 years old, as well as Yasour heavy lift helicopters which are almost 50 years old. . Additionally, the IAF desperately needs to upgrade its fleet of fighter jets and is said to be looking for a combination of upgraded F-35s and F-15s.

“There is no country in the world that flies such old platforms,” ​​Eshel said at the time. “Flying a refueler or helicopter with more than 50 soldiers inside is not trivial. These are non-trivial risk levels ”.

“If God didn’t allow something to happen, what would we say to ourselves?” I ask. “Our operational and security needs are paramount. There is no other way to present it ”. 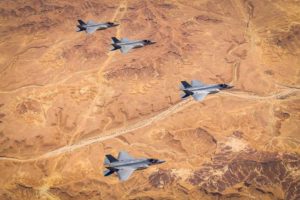 Another question looming over the issue is whether Prime Minister Benjamin Netanyahu and Defense Minister Benny Gantz will find a way to work together to advance the deal during the election period. For the deal to pass it would have to be brought to the cabinet – and that would require an agreement between Gantz and Netanyahu, who must jointly set the agenda.

It is believed that Gantz would like to advance the agreement during his tenure – and make the improvement of the IDF one of the significant achievements during his short tenure.