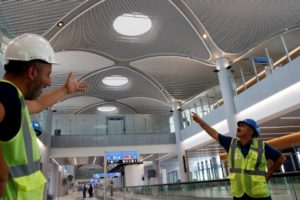 The airport is a key part of the 15-year-old building boom led by President Recep Tayyip Erdogan. The project is designed to accommodate up to 90 million passengers per year, making it one of the largest in the world.

The official opening was scheduled for October 29, but General Manager Kadri Samsunlu said the airport would be only partially open on that date.

“We postponed the big transfer from Ataturk Airport to Dec 31”, said Kadri Samsunlu. Currently, Ataturk is the main airport in the city.

Mr Samsunlu’s company IGA, which will operate the new airport, said last month that work there was on schedule and the planned Oct 29 opening would not be delayed.

The Turkish Airlines will fly from the new airport to Ankara, Izmir and Antalya on domestic routes, with the only international route being to Baku, in Azerbaijan.