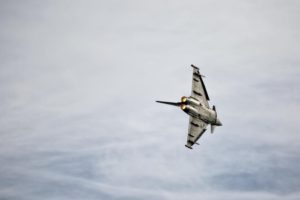 Italian Air Force Eurofighter F-2000A Typhoon crashed during an air show in the metropolitan area of ​​Lazio, causing the death of the pilot. The aircraft was making a demonstration flight, but fell into the Tyrrhenian Sea off the coast of Terracina. The airshow was interrupted at first, but then it continued.

The aircraft was filmed performing a huge loop before descending back down towards the sea, but it went horribly wrong when the jet plunged towards the sea as the desperate pilot battled to regain altitude. The pilot of the Italian Air Force Eurofighter F-2000A Typhoon, performing one of the final points of the flight program, crashed into the water.

Witnesses reported that he had not managed to eject. The body of the 36-year-old captain of the aircraft was found only after 1.5 hours.


Eurofighter Typhoon is a twin-engine, canard-delta wing, multirole fighter. The Typhoon was designed originally as an air superiority fighter and is manufactured by a consortium of Alenia Aermacchi (Leonardo since 2017), Airbus, and BAE Systems that conducts the majority of the project through a joint holding company, Eurofighter Jagdflugzeug GmbH formed in 1986.