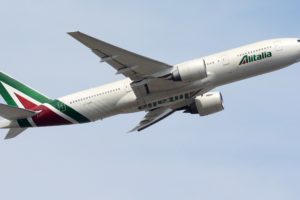 Italian law enforcement officers conducted searches at the headquarters of the airline Alitalia in the open case of its premeditated bankruptcy. The seizure of documents and the analysis of the contents of computers took place on Tuesday morning.

According to local media, the investigation is to identify those responsible for the appearance in the company’s budget of a “400 million EUR hole” and the possible involvement in this former leadership of an air carrier appointed by Etihad Airways in 2014 after it acquired a 49.9% stake in Alitalia from the Italian government.

In the center of attention of investigators are a number of questionable operations by the former administration of Alitalia, in particular, the concession in favor of Etihad of the most valuable slots – the time intervals allocated by airports for servicing flights and the distribution of bonuses for tickets purchased by passengers. The case was opened after the city court of Civitavecchia, in whose jurisdiction the home airport Alitalia Fiumicino is located, announced the “insolvency status” of the airline after analyzing the multimillion deficit in the company’s financial statements.

Alitalia is balancing on the brink of bankruptcy for several years. In August 2014, an agreement was signed with Etihad Airways on the sale of the Emirates airline to 49% of the shares of the national air carrier. The contract provided for the recapitalization of the company for a total of 1.185 billion EUR.

In April 2017, the airline employees rejected the “anti-crisis plan” of its development during the “corporate referendum”, which envisaged a serious reduction of expenses, including maintenance of personnel. After that, in May the company introduced emergency management within the framework of the Italian bankruptcy law. To ensure the financing of the airline for the emergency management period, the Italian government granted her a bridge loan of 600 million EUR in May, to which an additional 300 million EUR were added in October.

In late April, the Italian government decided to extend the timing of the sale of Alitalia until October 30. Thus, the fate of the national carrier will be in the hands of the future Council of Ministers of the country, the composition of which has not yet been formed.