Jon McBride, head of astronauts at Kennedy Space Center, was in Rosario and encouraged young people to join the space field.

Turn around in an hour and a half to Earth and see different perspectives in each of them, for about two weeks. Or travel at the speed of sound, but multiplied 25 times.

Those experiences and others were those reported yesterday by Rosario astronaut Jon McBride (76), who came to the city to encourage young people to integrate into the world of astronomy and astronautics studies.

McBride was a pilot in the STS-41G mission of the space shuttle Challenger, which orbited the land in 1984 and is currently chief of the astronauts of the Kennedy Space Center Astronaut Encounter of NASA, in the state of Florida, in the United States.

In 1978 he became an astronaut for NASA and six years later he piloted the space shuttle. Since 1987, he has been in charge of relations with Congress in Washington.

“Everyone was very warm and friendly,” McBride said in a dialogue with La Capital after the various talks on astronomy and astronautics he held at the Ros Tower hotel.

McBride is part of the Association of Space Explorers, an organization that has among its main missions to travel the world visiting schools and talking with young people to encourage them to be interested in science and everything that revolves around the topics referred to space.

Although there are no Argentine astronauts yet, there are several who, in different areas and with different tasks in charge, work for NASA. This is the case of the Rio Miguel Miguel Martín and Buenos Aires Pablo de León.

“I would love to see more Argentines on the subject of space exploration. There may be many Argentines working for NASA,” McBride said. Members of the team that accompanied the astronaut to the country indicated that NASA has 20,000 employees, as well as contractors from companies and universities.

They just remembered that De León is a professor at the University of North Dakota (UND), a consultant to NASA and that he is currently working on the development of space suits for that space agency.

However, McBride remarked: “Currently, we have astronauts from Mexico, Costa Rica and Brazil who have traveled to space. It is about encouraging people, and especially young people, to be more interested in studying all the topics on science space”.

From the large number of places McBride visited to speak on the subject, new astronauts and people who ended up working at NASA emerged.

“In the 50 years that I have been talking about this, at least I know of two cases of people who became astronauts and heard me talk about it. And many people have heard me talk and have ended up working at NASA,” he said. 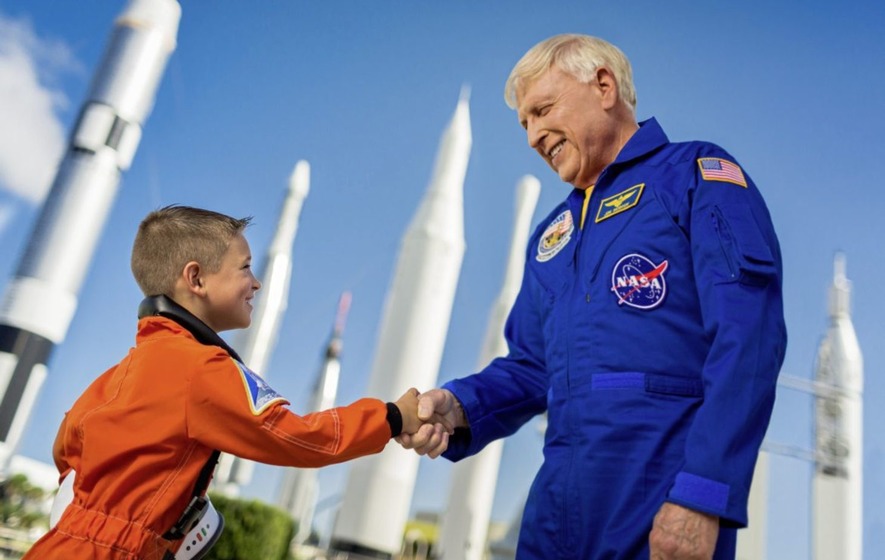 In turn, he did not hesitate to describe the experience of going to space as “wonderful. From the moment the engines are turned on, eight and a half minutes will be traveling 25 times at the speed of sound, going around the earth every hour and a half, seeing a different part of the earth at every turn. It’s really something wonderful. “

“Once there, time is used to launch satellites, do medical experiments, learn to process metals in a different environment and make some advances in space science, which cannot be done on earth,” he added.

On the missions, he said: “The first lasted four to five days, while the last were up to 17 days. The international space station has been orbiting us for almost 20 years and, since then, there was always someone living there.”

As a record, he said that there were astronauts who lived more than a year, between 13 and 15 months.

On the dimensions of the space station, McBride explained that it has the volume of a Boeing 747 and that, due to the lack of gravity, the space can be used in double or triple the possibilities. “If we were there, we could be doing the interview on the roof,” he joked.

The experience in space is unforgettable, as well as the preparation that an astronaut must make to arrive: it is practiced again and again, up to three times a day for a long time, so that, when arriving at the moment of being in orbit, everything is rehearsed and each maneuver is known.

In fact, the agenda that an astronaut must meet once he is in space is stipulated one year in advance, with the work that must be done hour by hour.

“We sleep eight hours a day and we have between 30 and 40 minutes for food. The rest of the time is work that is already scheduled. It’s a lot of money to be up there, so you have to make the most of it,” he concluded.