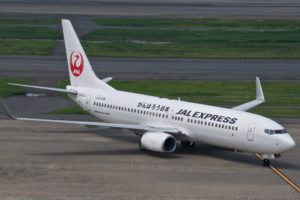 Japan Airlines Boeing 737 rejected takeoff from Tokyo Haneda Airport due to fire in engine. The airplane waited for departure on the runway for a flight to Matsuyama, when the behind ANA aircraft noticed flames emitting from one of the engines of Japan Airlines Boeing 737. The takeoff was aborted and the aircraft returned to the parking area. All the 122 passengers were disembarked and transferred back to the terminal by busses. There were no reported injuries and all the people were rebooked to another flight to Matsuyama.

The Japan Airlines aircraft Boeing 737 did not suffered structural damages during the accident, but remained on land for further repairs and special safety inspection. The local authorities initiated investigation for the accident.

During the accident, Haneda Airport closed the runway for about 10 minutes to confirm the safety, but there was no big delay in other airliners flights.

Boeing 737-800, commonly abbreviated as 737NG, is the third generation derivative of the 737, and follows the 737 Classic. It is short- to medium-range, narrow-body jet airliners. The passenger cabin of the 737 Next Generation improved on the previous style interior by incorporating select features from the 777, with larger, more rounded overhead bins and curved ceiling panels. The aircraft is driven by two CFM56-7B24/26/27 engines with propulsion power of 24,000–27,000 lbf (110–120 kN).