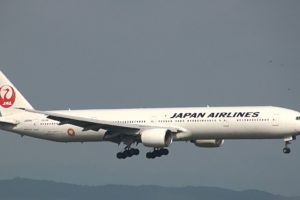 Japan Airlines Boeing 777 emergency landed on Tokyo’s Haneda airport due to fire in engine. The aircraft took off from the Japanese airport en route to New York with 233 passengers and 15 crew members, but during climbing a bird strike caused fire in No1 engine GE90-115B. The pilots diverted the airplane back to the airport and safely landed on runway 34L several minutes later without reporting injuries among the 248 passengers and crew members.

Tower controller observed fire erupted from the engine, and some small areas of grass at left side of the runway were burned. Also airport/civil aviation bureau personnel found some debris on the runway 34R.

After landing the safety inspectors estimated that some blades of turbine were broken. The investigation for the root cause of the fire in engine GE90-115B is under way.

Boeing 777 is a family of long-range wide-body twin-engine jet airliners developed and manufactured by Boeing Commercial Airplanes. It is the world’s largest twinjet and has a typical seating capacity of 314 to 396 passengers. The concerned aircraft is Boeing 777-300ER, which is higher MTOW and increased fuel capacity permits a maximum range of 7,370 nautical miles (13,650 km) with 396 passengers in a two-class seating arrangement. The Boeing 777-300ER features raked and extended wingtips, a strengthened fuselage and wings and a modified main landing gear. Its wings have an aspect ratio of 9.0 and is powered by the GE90-115B turbofan, the most powerful jet engine with a maximum thrust of 115,300 lbf (513 kN).

Newer PostEgypt is ready to sign a protocol on aviation security with Russia
Older PostUSA won the dispute with EU for 8.7 billion USD tax relief to Boeing