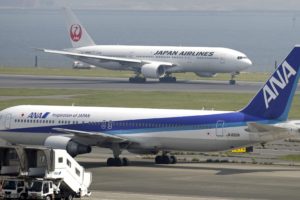 Japanese airlines canceled at least 586 flights both on domestic and international routes, because of typhoon Talim. Typhoon Talim made landfall on Japan’s Kyushu island Sunday, spurring authorities to call for the evacuation of tens of thousands of residents amid record rainfalls measured in some areas.

Airlines are urged to closely monitor the schedule, as they do not exclude the increase in the number of canceled flights.

Currently, the typhoon Talim is in the south of Japan in Kagoshima Prefecture and moves in a northeasterly direction. Pressure in its center is 975 hectopascals, wind force up to 30 m/s, with gusts up to 45 m/s. According to the forecasters, under the influence of the typhoon on the islands of Kyushu and Shikoku, up to 350 millimeters of precipitation can fall one day before Monday.

The Japan Meteorological Agency said it expects Talim to proceed up the Japanese archipelago through Monday and issued warnings of potential landslides and flooding.