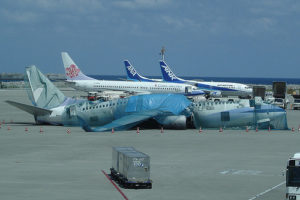 Japanese airlines canceled more than 200 domestic flights from Naha Airport, located in the southern prefecture of Okinawa, due to the growing Typhoon Trami. It is expected that the typhoon will reach the islands of Okinawa and Amami in southwest Japan on Saturday, without losing its strength. The wind speed near the epicenter of the typhoon is 162 km/h.

The citizens of the islands are warned to be prepared for rainstorms, strong winds and giant sea waves.

Typhoon Trami, currently a category 2 storm, is forecast to pass over Japan’s southern Ryukyu Islands Friday night, bringing heavy rain and wind, but is expected to strengthen over the next 24 to 48 hours to regain category 3 status. The Ryuku Island chain stretches north of Taiwan to the Japanese island of Kyushu, and includes Okinawa, the largest island in the chain, with a population of 1.4 million people, including around 25,000 US troops and their families.

The worst impacts will be from late Friday night into Saturday night across the southern Ryukyu Islands as Typhoon Trami passes between Miyako and Okinawa. It will reach the western part of Japan on Sunday, after which it will move to the eastern and northern parts of the country.