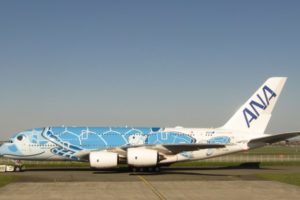 Japanese All Nippon Airlines, commonly known as ANA, took delivery of its first Airbus A380. Thus, the airline became the first Japanese operator of the double-decker aircraft. The delivery is the first of three already orders planed by ANA, which were inherited by the airline in its acquisition of low-cost Skymark Airlines. The aircraft will enter services in late May exclusively on the Tokyo-Honolulu route.

Other two A380, which will be delivered later this year, will exclusively serve the Tokyo to Honolulu route too, complementing existing Boeing 787 Dreamliner service.

The aircraft has 520-seats across four cabins in ANA’s unique configuration, increasing the efficiency of operations on the route.

ANA will be the last new customer to take delivery of the aircraft A380, as Airbus ceased its wide-body long-haul aircraft production program.

“They (Airbus) will still deliver a few more (A380s) to Emirates, but ANA is its last new customer delivery”, says the official statement of All Nippon Airlines.

Airbus A380 is the world’s largest passenger airliner, a wide-body aircraft manufactured by Airbus. The full-length double-deck aircraft has a typical seating capacity of 525, though it is certified for up to 853 passengers. It is powered by four Engine Alliance GP7200 or Rolls-Royce Trent 900 turbofans providing a range of 8,000 nmi (14,800 km). As of February 2019, Airbus has received 290 firm orders and delivered 234 aircraft; Emirates is the biggest A380 customer with 123 ordered, of which 109 have been delivered.