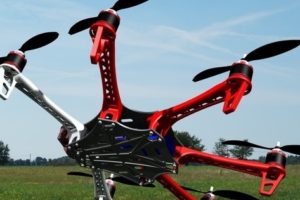 Japanese company Yamaha introduced the agriculture UAV YMR-01, which can be used to spray various chemicals over fields. The sales of the new unmanned aerial vehicle will begin in 2018.

In the agricultural industry, Yamaha is known as the manufacturer of remotely operated helicopters Rmax and Fazer. They are designed to handle large areas of the field. Currently, about 2,500 such machines are used in agriculture. However, agriculture UAV YMR-01 is a significantly cheaper alternative to remotely controlled helicopters. The device will be able to spray chemicals over a field of up to 10,100 square meters. UAV received spraying systems from Yamabiko, which will sell YMR-01 through its dealer network.

The new drone is made according to the hexacopter scheme. Front and rear two of its beams are equipped with electric motors with an upper arrangement of propellers. The lateral two beams have electric motors with two air coaxial screws. In flight, such screws, according to Yamaha, create a uniform airflow. Coaxially with the side air screws there are also injectors of chemical sprayers. Yamaha claims that this arrangement of the spray guns allows for a more effective deposition of chemicals to the fields. Other details about the project are not specified.

During spraying, the drone independently regulates the amount of pesticides emitted, depending on the speed of movement. Also, if necessary, return MG-1 remembers the point at which it stopped, and continues to work with it.