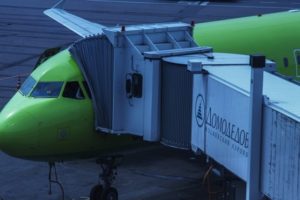 The jet fuel prices in Russia have risen by 30% since early 2018, according to the data of the Russian Ministry of Transport.

“This is a serious problem for airlines”, said Deputy Minister of Transport Alexander Yurcic, who makes the calculations on the basis of an annual average weighted price. According to him, the problem is exacerbated against the background of the appreciation of the US dollar, which surpassed the price of 68.66 rubles.

Because of the price of kerosene, the airfares can significantly increase, according to the Transport Minister, Yevgeny Dietrich.

He proposed a one-off subsidy for carriers to offset the losses.

The discussions about such state subsidied were not yet advanced to the government and the President Vladimir Putin.

Most Russian domestic jet fuel is sold at fixed prices by an airport’s fuel terminal, which is often a sole supplier. The government recognizes the lack of competition in the aviation fuel market and often advises suppliers on appropriate price levels. Airlines, government entities and suppliers are looking for a fair price index for Russia that they can use for local transactions.

Newer PostBritish Airways and Air France stop direct flights to Iran
Older PostWhy Ryanair is going through so many turbulence?