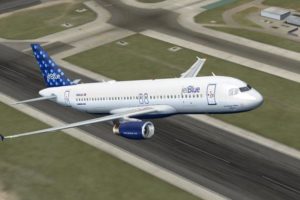 Jetblue Airbus A320-200 plane reported smoke on board during a flight from New York La Guardia airport to West Palm Beach, Florida. Shortly after takeoff the crew decided to divert to Raleigh/Durham airport after suffering smoke on board, which caused ill to some passengers. The aircraft landed safely about 25 minutes later. Several people from the aircraft were medical tested at the Raleigh/Durham airport and two of them taken to the hospital with minor injuries. Some passengers complained of headache and a burning sensation in the eyes.

According to the airport and Jetblue airline, the accident was caused by mechanical problem on board of the airplane Airbus A320-200. The aircraft remained on the ground and a replacement plane departed from Raleigh/Durham airport to resume the flight. The airplane reached West Palm Beach with a delay of 6.5 hours.

The local authorities and safety inspection initiated investigation for the root cause and circumstances around the aviation accident.