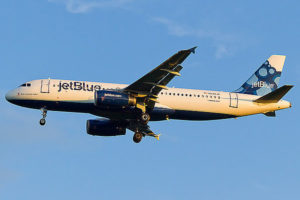 Jetblue Airbus A321-200 made an emergency landing at Los Angeles International Airport after a lightning strike. The aircraft was performing flight B6-324 from Los Angeles to New York JFK with 153 passengers and 6 crew on board. During climbing, Jetblue Airbus A321-200 was struck by lightning and the crew decided to return to Los Angeles International Airport for a safe landing. The aircraft landed about 25 minutes after departure without reporting any damages.

There were no reports about injuries among the passengers. A replacement aircraft was sent, which reached New York with a delay of 4:20 hours.

Lightning strikes can be dangerous for the aircraft, but the last deadly accident from such kind occurred in 1967.

Airbus A321 is a member of the Airbus A320 family of short- to medium-range, narrow-body, commercial passenger twin-engine jet airliners. Final assembly of the aircraft takes place in Hamburg, Germany, or Mobile, Alabama. As of 30 September 2018, a total of 1,777 Airbus A321 aircraft have been delivered, of which 1,755 are in service.