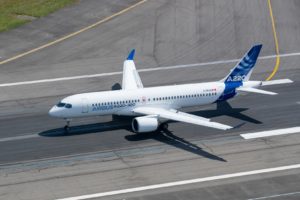 The US low cost airline JetBlue became the first customer of the Airbus A220 family (Bombardier CS), having signed the Memorandum of Understanding on the acquisition of 60 A220-300 liners under a fixed contract.

“In addition, the airline has transferred a firm contract for 25 Airbus A320neo aircraft to the contract for A321neo aircraft. The Pratt & Whitney GTF engines will be installed on the selected A321neo and A220 aircraft”, says Airbus in official statement.

JetBlue Airways Corporation is an American low cost airline headquartered in New York City. A major air carrier and the sixth-largest airline in the United States, JetBlue is headquartered in the Long Island City neighborhood of the New York City borough of Queens, with its main base at John F. Kennedy International Airport. It also maintains corporate offices in Cottonwood Heights, Utah and Orlando, Florida.

As of May 2018, JetBlue serves 102 destinations (the latest addition being Steamboat Springs, Colorado) in the U.S., Mexico, the Caribbean, Central America and South America.