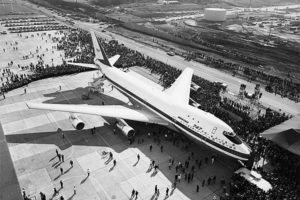 Jumbo Jet performed a test flight with pilots of the company Jack Waddell and Brien Wygle. The plane took off from the company’s factory airfield in Everett. On board was also an engineer, Jess Wallick. The first flight of the aircraft was recognized successful, and the airliner responded to the declared characteristics, despite the fact that the engineer noted minor problems with one of the flaps.

At the time of its creation, the Boeing 747-100 was the largest and heaviest passenger airliner, remaining as such for 36 years. The pilots came up with the nickname “Queen of Heaven” and Jumbo Jet.