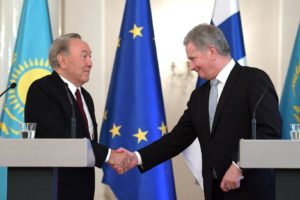 The aviation authorities of Kazakhstan and Finland have agreed to expand air communication. Thus, Kazakhstan granted Finland the right to make seven flights per week to Almaty and Astana, as well as the right to use any aircraft. It is reported by the press service of the Civil Aviation Committee of the Ministry of Investment and Development of Kazakhstan. The memorandum on air traffic was signed by the parties as part of the official visit of the President of Kazakhstan, Nursultan Nazarbayev, to Finland.

It is planned that the agreements will contribute to the development of trade and economic cooperation, tourism and business partnership.

“Kazakhstan holds a strategic position in Central Asia and is an important political and trade-economic partner of Finland in this region”, said the President of Finland, Sauli Niinisto. He said that Kazakhstan is rich in various natural resources and minerals, while Finland has technologies. “The combination of these aspects can be mutually beneficial. Being a member-country of the European Union, Finland actively promotes the issues related to the interaction between the EU and Kazakhstan”, added he.

It should be mentioned that in 2017 the Kazakh side granted FinnAir the right to operate seven flights a week (daily) via Helsinki-Astana route. Starting from summer 2017 FinnAir performed direct Helsinki-Astana flights twice a week. Additionally, FinnAir operated two Astana-Helsinki flights per week with the A319 aircraft from July 3 to August 23, 2018.