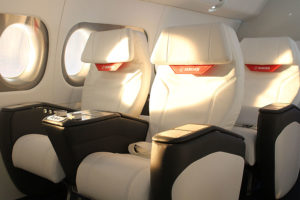 King of Bahrain Hamad bin Isa Al Khalifa inspected the Russian aircraft SSJ 100, which is presented at the air show BIAS-2018 in Bahrain, and drew attention to the large luggage compartments of the aircraft.

“For the region, as it turned out, the volume of luggage compartments is also important. Today, the King of Bahrain specifically showed how large the SSJ 100 is in terms of luggage compartments and shelves, a comfortable and convenient aircraft, which turned out to be just as important for the region than for Russia. Everything our counterparts pay attention to this”, said the president of the company Sukhoi Civil Aircraft, Alexander Rubtsov.

The head of Chechnya, Ramzan Kadyrov, took part in the inspection of the Russian plane along with the King of Bahrain, who flew to the exhibition at the invitation of his authorities.

The Sukhoi Superjet 100, also known by its abbreviation SSJ100, is a fly-by-wire twin-engine regional jet with 8 (VIP) to 108 (all economy) passenger seats. Sukhoi claims cash operational costs lower by 8-10% than competitors, reduced fuel burn per seat and higher maintenance intervals. It is designed to compete internationally with its An-148, Embraer E-Jet and Airbus A220 counterparts.

The final assembly of the Superjet 100 is done by Komsomolsk-on-Amur Aircraft Production Association. Its SaM-146 engines are designed and produced by the French-Russian PowerJet joint venture and the aircraft is marketed internationally by the Italian-Russian SuperJet International joint venture.