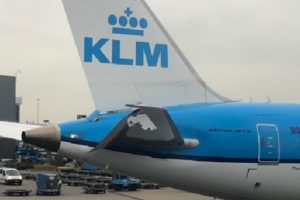 KLM airplanes Boeing 747-400 and Boeing 787-900 collided during ground maneuvers at Amsterdam-Schiphol International Airport in the Netherlands. The Boeing 787-900 was stationary, while Boeing 747-400 was pushed back from gate F8 to the taxiway and hit the right-hand horizontal stabilizer of the Boeing 787 with its winglets. Following the contact, both aircraft suffered minor damages and no people were injured. Unfortunately, the two aircraft was taken out of service for repairs and all the passengers for flights KL601 and KL623 were rebooked for replacement airplanes.

Both aircraft were destined for the United States. One of the aircraft was on its way to Atlanta and the other was to leave for Los Angeles.

“We will think about the cause later, now it is only important to put the passengers on another plane as quickly as possible. The aircraft are carefully checked and therefore remain on the ground for the time being”, said the spokesperson of KLM. “For the people who were on their way to Atlanta, this has already happened, and we are still working to help the people who are going to Los Angeles”, adds the statement.

KLM Royal Dutch Airlines is the flag carrier airline of the Netherlands. KLM is headquartered in Amstelveen, with its hub at nearby Amsterdam Airport Schiphol. It is part of the Air France–KLM group, and a member of the SkyTeam airline alliance.