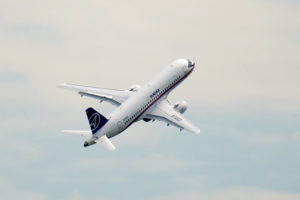 The Russian aircraft manufacturer Sukhoi and the Thai Kom Airlines have signed a contract providing for the delivery of six SSJ 100 aircraft in the layout for 100 seats. The contract was signed on February 28, 2019, in Bangkok (Thailand). The total value of the order is about 300 million USD in catalog prices.

Under the terms of the contract, deliveries will be made from 2019 to 2020. It is expected that the first SSJ 100 aircraft will be delivered to Kom Airlines in the autumn of 2019. Kom Airlines plans to use the SSJ 100 for transportation both domestically and to the nearest international destinations. Maintenance of the aircraft SSJ 100 will perform WishV, a MRO organization registered in Thailand.