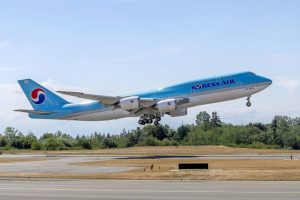 The South Korean airline Korean Air celebrates 50 years since the founding of the company. On March 1, 1969, was established Korean Air with a fleet of eight propeller passenger aircraft. The company operated flights to only 13 cities of the two countries. The long-haul freight operations were introduced on April 26, 1971, followed by passenger services to Los Angeles International Airport on April 19, 1972.

However, after 50 years, Korean Air became the largest national airline that flies to 124 cities in 44 countries.

As of February 2019, Korean Air has a fleet of 166 aircraft in operation. It is among the top 20 airlines in the world in terms of passengers carried and is also the top-ranked international cargo airline

It is known that the company will not hold any events in honour of its 50th anniversary.

Korean Air Lines, operating as Korean Air, is the largest airline and flag carrier of South Korea based on fleet size, international destinations and international flights. The airline’s global headquarters are located in Seoul, South Korea.