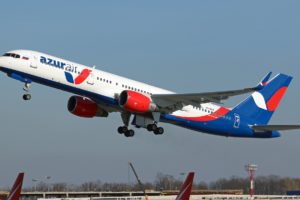 The Krasnoyarsk court imposed a fine on the airline AZUR Air for delaying a flight to Thailand for more than 12 hours. According to the officials and authorities the airline was found guilty for the unreasonably allowed flight delay to Phuket without providing backup aircraft. Following the court decision, the airline will have to pay a fine of 100,000 rubles.

“On December 24, 2016, at the airport in Kazan the airline AZUR Air unreasonably allowed a flight delay to Phuket lasting more than 12 hours, contrary to the requirements of the law without providing a backup aircraft”, said the press release of the Krasnoyarsk court.

Based on the results of the inspection, the case against the airline was initiated under Article 14.1.2, part 3 of the Code of Administrative Offenses (carrying out business activities in the field of transport in violation of the conditions stipulated by the license).

“By decision of the Krasnoyarsk court AZUR Air was found guilty of committing the specified administrative violation and was sentenced to a fine of 100,000 rubles”, said the prosecutor’s office.

Flight to Phuket on December 24 was due to departure at 17.40 MSK, but due to the fault of the airline, about 300 passengers were forced to spend the night at the airport, as many of them were with children.