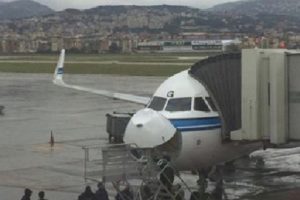 Kuwait Airways plane Airbus A320-214 suffered damage to the nose radome during a flight. The plane was performing flight KU501 from Kuwait to Beirut in Lebanon, but at the approach to the airport of destination was hit by a thunderstorm at an altitude of 8,000 feet. The plane hit a snow-capped mass, which caused damage to its nose radome. Fortunately, there were no reported injuries during the bad weather and the passenger suffered only unpleasant turbulence. Kuwait Airways plane Airbus A320-214 landed safely shortly after that in Beirut-Rafic Hariri International Airport.

The Civil Aviation Safety Department at Beirut airport is conducting technical tests on the aircraft to find out the extent of the damage suffered by the aircraft.

The Airbus A320 family consists of short- to medium-range, narrow-body, commercial passenger twin-engine jet airliners manufactured by Airbus. The family includes the A318, A319, A320 and A321, as well as the ACJ business jet. The A320s are also named A320ceo (current engine option) following the introduction of the A320neo (new engine option).