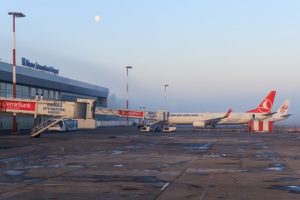 Kyrgyzstan’s Manas International Airport was evacuated due to a bomb threat. All the passengers and staff were evacuated after a message about a bomb in the terminal. The police and the State Committee for National Security of Kyrgyzstan cordoned off the building and searched for explosive devices. Nothing was found and the bomb threat turned out to be false.

“Information about the bomb at Manas International Airport was received at 18.46 local time and all passengers and personnel have been evacuated”, says the official statement of the airport.

Employees of the Ministry of Internal Affairs and the State Committee for National Security are already working at the scene.

Manas International Airport is the main international airport in Kyrgyzstan located 25 kilometres north-northwest of the capital Bishkek. The airport is operational 24 hours and its ILS system meets ICAO CAT II standards, which enables aircraft operations in a low ceiling (30 meters) and visibility (350 meters). During its existence, Kyrgyzstan Airlines had its head office on the airport property.