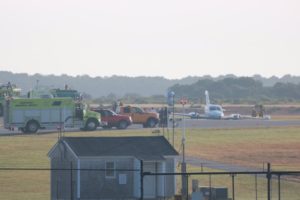 Landing gear of the aircraft Cessna 402B Businessliner collapsed during an aborted takeoff attempt at Nantucket Memorial Airport in Nantucket, Massachusetts. There were no reported injuries during the incident, but the business jet suffered some damages. During the accident only the pilot was on board.

The pilot of a Cessna 402B was attempting take off when a problem developed with the aircraft’s landing gear, forcing the plane to come to a stop on Runway 24. The pilot was standing next to his aircraft when first responders arrived on the runway. The man was taken to Nantucket Cottage Hospital for medical treatment and test, but there were no significant injuries.

The local authorities initiated investigation for the root cause of the accident. The aircraft will be removed from the runway and the operations of Nantucket Memorial Airport in Massachusetts will return to normal.

Cessna 402 is series of 6 to 10 seat, light twin, piston engine aircraft. This line was manufactured by Cessna from 1966 to 1985 under the name Businessliner. All seats are easily removable so that the aircraft can be used in an all-cargo configuration. Cessna 402B Businessliner version has a six to eight-seat interior with executive seating intended for corporate transport.