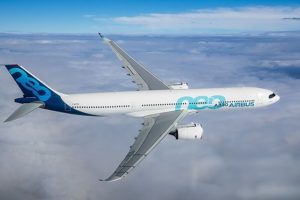 Latest generation of Airbus A330neo, A330-900, completed first successful test flight to Toulouse. The aircraft was in the air for 4 hours and 13 minutes and landed safely at Toulouse Blagnac airport. During the first flight in the cockpit there were two test pilots and one test engineer. In addition, three test engineers monitored the operation of all aircraft systems in real time at special stations located on the aircraft.

The A330-900 is powered by the latest generation of Rolls-Royce Trent 7000 engines, which feature with higher efficiency and more power.

“Today’s flight is a very important milestone in the history of Airbus”, said the President of Airbus Commercial Aircraft, Fabrice Bregier. “It once again underscores our desire to constantly improve our product. My sincere congratulations to those who participated in the preparation of this important event and thanks to whom this flight became possible. In addition, I would like to express our gratitude to our customers who chose this efficient and modern aircraft. We look forward to putting the A330neo into commercial operation in 2018”, added he.

The first flight A330-900 marked the beginning of an extensive test flight program, in which three test ships will fly a total of about 1,400 hours. The receipt of the type certificate from the EASA and FAA aviation authorities for the A330-900 is scheduled for mid-2018. Three test aircraft (two A330-900 and one A330-800) will participate in the A330neo test flights program. In addition, one serial aircraft A330-900 will be used to test the new passenger cabin Airspace. The first operator of A330-900 will be the airline TAP Portugal.

Aircraft A330-900 (MSN1795), which today made its first flight, will participate in tests of permissible flight modes, braking systems, autopilot and avionics, in tests for the impact of various loads and other tests related to the flight performance of the aircraft. He will also take part in testing at low temperature. On board this aircraft, heavy test equipment is installed.

The A330neo program was launched in July 2014 by Airbus. The A330neo family is represented by two models – the A330-800 and the A330-900, which are designed to accommodate 257 and 287 passengers in three classes. These aircraft are equipped with highly efficient Rolls-Royce Trent 7000 engines with a two-circuit ratio 10:1, have an improved aerodynamic contour (new A350 XWB endings, increased wing span, titanium pylons), and also better passenger cabin airspace. In comparison with its predecessor, the A330-800, the fuel consumption for the “chair” of the A330neo will be reduced by 14%, and the flight range will increase by 740 km. In addition, by optimizing the interior space of the cabin, the A330neo can accommodate up to 10 additional seats. Airbus A330neo will be of the type A350 XWB, giving passengers all the benefits of the latest technology and services on board.

At the moment, Airbus has received 212 orders from 12 customers on the A330neo.