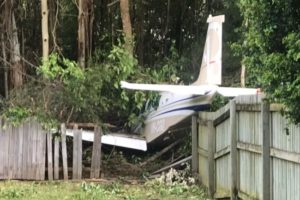 Light aircraft Beechcraft A36 Bonanza crashed in the backyard of a private house in East Australia. The incident occurred in the area of the Sunshine Coast in the southern part of the Australian state of Queensland, missing the residential homes by a few meters. Fortunately, there were no injured people on the ground.

On board of the aircraft Beechcraft A36 Bonanza was only a pilot. According to the state ambulance representative, the pilot was slightly injured and his life is not in danger.

“The plane crashed in the trees, and then turned around and landed in the backyard of my neighbor”, said one of the eyewitnesses to the incident.

At the moment emergency services and aviation experts are at the scene of the incident.

Beechcraft Bonanza is an American general aviation aircraft introduced in 1947 by Beech Aircraft Corporation of Wichita, Kansas. The six-seater, single-engined aircraft is still being produced by Beechcraft and has been in continuous production longer than any other airplane in history. Beechcraft A36 Bonanza has an improved deluxe interior, a new fuel system, higher takeoff weight, from 1984 fitted with a Continental IO-550-BB engine and redesigned instrument panel and controls.