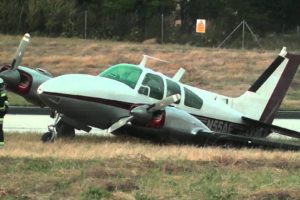 Light aircraft Beechcraft Baron crashed near Christiansted, Saint Croix, US Virgin Islands, causing death of 5 people. The aircraft departed from Henry E. Rohlsen Airport (TISX), but the pilot attempted return after loss of power. The aircraft impacted field terrain and suffered substantial damages, causing fatal injuries of the all people on board. The Virgin Islands Port Authority confirmed in a statement that the private plane experienced mechanical issues that caused the crash.

“Sadly, all five persons onboard perished – including the pilot”, said the Port Authority in official statement.

The aircraft Beechcraft Baron took off from the Saint Croix airport and soon later started experiencing engine problems, with flames coming from one of its two engines. The pilot circled back and attempted to land at the airport, but the plane crashed in a field area near the runway.

The Beechcraft Baron is a light, twin-engine piston aircraft developed by Beechcraft and introduced in 1961. A variant of the Travel Air, it remains in production in 2017. The aircraft has capacity for 3 passengers, length of 8.53 m, wingspan of 11.53 m and height of 2.92 m. The wing area is 18.50 sq m and maximum takeoff weight is 2,313 kg. The aircraft is driven by two Continental IO-470-L air-cooled six-cylinder horizontally opposed piston engine, 260 hp (194 kW) each.