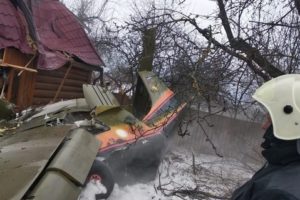 The Interstate Aviation Committee formed a commission to investigate the accident. The work of the commission is underway.

The house was located in Kolomensky District in Moscow Region. Luckily it was not residential, which prevented having victims on the ground.

The crashed aircraft Chaika S-72 Okhotnik is unique, monoplane with the upper wing. The airplane features with tricycle landing gear with a self-orienting tail wheel and separate braking of the wheels of the main supports, as well as four-seater cabin, an independent flight control system for three channels, duplicated by control elements. The airplane has registration RA-2613G.