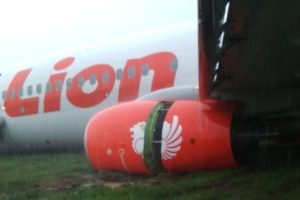 Lion Air Boeing 737-800 suffered a runway excursion during landing at Pontianak-Supadio International Airport in Indonesia. The aircraft was performing flight JT714 from Jakarta-Soekarno-Hatta International Airport with 189 people on board, but during landing at Pontianak in heavy rain and poor visibility rolled off the end of the runway and stopped with the main landing gear just off the paved end of the runway Fortunately there were no reported injuries during the accident.

“True, the aircraft slipped due to heavy rain. There were no fatalities and injuries during the accident” said Polana Pramesti, Director General of Air Relations at the Ministry of Transportation.

The emergency services were sent at the scene of the troubled aircraft and all the passengers were disembarked at the runway through mobile stairs. There were no reported injuries and people were transferred to the terminal with busses.