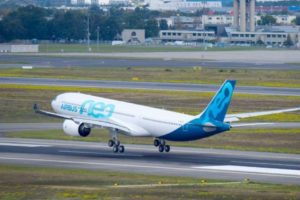 Indonesia’s largest low-cost airline, Lion Air, has decided to replace the long-haul Boeing 747-400 aircraft with Airbus A330-900NEO, according to a statement of the representative of the carrier Danang Mandala Prihantoro.

“The company has used this aircraft [Boeing 747] for 10 years on domestic routes. At the same time, the transition to Airbus liners is a strategic step that meets modern needs” noted Danang Mandala Prihantoro.

The first such aircraft is expected to arrive in Indonesia in May, and by the end of the year, Lion Air will receive two more. In total, the budget carrier has signed a contract for purchasing 10 Airbus А330-900NEO.

Lion Air occupies approximately 40% of the Indonesian air transport market, and in 2017, the company handled about 51 million passengers. The carrier is the second largest low-cost airline in Southeast Asia after Malaysian AirAsia. It has almost 300 airplanes in the fleet, most of them are Boeing’s 737 modifications. In the near future, the only long-haul aircraft will be the Airbus A330-900NEO. The company operates flights both within the country and abroad, particularly to Australia, India, Malaysia, Singapore, Thailand.

On October 29, 2018, the airline’s Boeing 737 MAX8 operated a flight from Jakarta to Pangkal Pinang. Approximately 13 minutes after departure from the airport, the plane crashed into the Java Sea. All 189 people on board died.