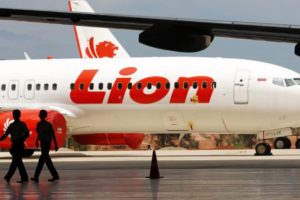 Lion Air’s Boeing 737 MAX8, carrying 189 passengers and crew, crashed into the sea shortly after takeoff from the Indonesian capital Jakarta. The flight JT610 was reported missing 13 minutes after it took off at 6:20 a.m. (local time) en route to Pangkal Pinang, the capital of the Sumatran island of Bangka-Belitung. The connection with the aircraft was lost and the Air Traffic Control Service immediately reported to local authorities to organize a search and rescue operation.

Rescuers found debris from the Lion Air’s Boeing 737 MAX8 in the sea near the town of Karawang, located in West Java province. The crash claimed 189 lives, of which 181 were passengers and eight were crew

“We found lifejackets, mobile phones and debris from the plane”, said a spokesman pf the Indonesian Search and Rescue Agency. “The fuselage is probably on the sea floor at a depth of about 35 meters”, added he.

The crew of the aircraft had asked to return to airport of Jakarta shortly before losing connection with the Indonesian Air Traffic Control Service. They allowed the plane to return, but then the contact was lost.

The root cause of the accident is under investigation. The aircraft Boeing 737 MAX8 is one of the newest airplanes in the fleet of Lion Air, delivered just a few months ago. National Transport Safety Committee chief Suryanto Cahyono says that since its delivery in August the aircraft has completed 800 flight hours.