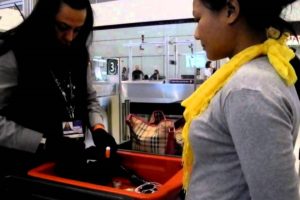 Security guard of the London airport, who worked there for more than ten years, shared in an interview how criminals are stealing personal belongings of passengers during the inspection. The employee said that criminals steal something every day: laptops, jewelry, wallets. Once he witnessed how a woman was stolen a vase with the ashes of her husband.

According to the guard, many scammers book the cheapest tickets to enter the airport and cash in on the scattered passengers.

“As a rule, these are middle-aged men who work in groups. Most of all they like the early morning, when all passengers are sleepy, or the peak of the family tourist season, when children are constantly distracting their parents”, said the employee, who rejected anonymity.

Despite the fact that he kept an eye on the surveillance cameras and immediately contacted the police after complaints, he admits that investigations often stop, as passengers rush to the flight.

The security officer believes that there are too many people at airports now.

“Earlier, one officer inspected each passenger, and now there is four passenger per officer”, the guard complained. “Trays with things often pass through the scanner faster than the guard manages to inspect the owner. No one is following their hand luggage”, added he.

In May, London City Airport employees figured out a thief who stole a MacBook Air laptop from a student during one of the checks, but did not attempt to detain him. A resident of the Netherlands returned home from vacation with her family. During the inspection of personal belongings at the airport in London, an unknown man took her laptop and disappeared.