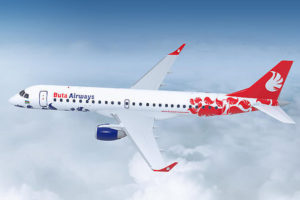 The first Azerbaijani low-cost airline, Buta Airways, has opened air tickets sales through its website. The first flight of the airline is scheduled for September 1 to Tbilisi. The airliner will offer also flights to Iran, Russia, Turkey and Ukraine.

“Starting today, the official site of Buta Airways, available in three languages ​​- Azerbaijani, Russian and English – was started. The company has already opened the sale of tickets through the site”, says the official information from Buta Airways.

At the moment, the sale of air tickets in several directions is open on the site. The customer can buy tickets to Antalya (Turkey), Kazan (Russia), Moscow (Russia), Kiev (Ukraine), Tehran (Iran) and Tbilisi (Georgia). With the beginning of the winter season (from October 29 this year), the Buta Airways route network will be replenished with cities such as Istanbul (Sabiha Gokcen Airport) and St Petersburg.

The minimum tariff for all destinations is only 29 EUR (one way). As a low-costes, additional services like baggage, hand luggage, hot meals on board, check-in at the airport, and choice of seats on the plane on Buta Airways will be paid.

Air tickets purchased at the minimum tariff are not subject to return and exchange.

ButaAirways is a structural subdivision of Azerbaijan Airways CJSC (AZAL). It was founded in December 2016. The airline fleet consists of modern aircraft fleet Embraer. The airline is based in Baku, at the Heydar Aliyev International Airport.